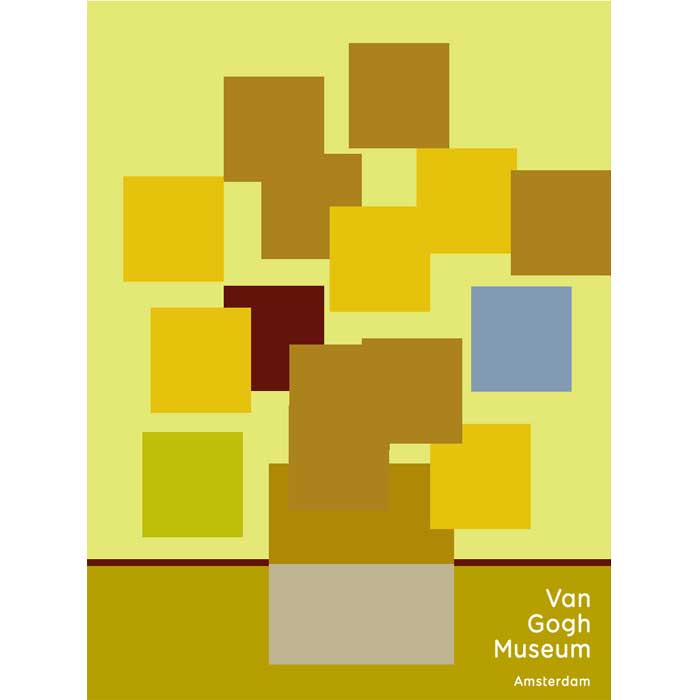 When I worked at Museum Het Dolhuys we had an Exhibition about Vincent van Gogh. The question that the Exhibition tried to address was whether he was a genius or a madmen.  We could not give a straight answer because that is not really possible on hindsight. What we did do was, research what all the experts were saying or had said about his mental state and we exhibited their conclusions. That is why we also did do some research on the Image of Van Gogh among the general public of the Netherlands. The most important question we asked was: ‘What comes in mind when you think of Vincent van Gogh?’.

The number 1 answer was: His ear.

The number 2 answer was: Sunflowers.

I gave a lot of (nationwide) interviews about this conclusion. His act of insanity was number one, not his beautiful art. It is actually not as startling as you might think. His life and his art combined is what makes him such a well known artist.  But what is less known is that he is not an ‘idiot savant‘ or that he did not make his paintings as acts of craziness. He is very rational painter who discusses with his brother and others the best ways to make an impact with his work. But he was also a tormented painter who probably ended his own life. That image of the crazy painter was even enhanced with the movie lust for life with Kirk Douglas.

My conclusion is that the image of Vincent van Gogh nowadays has not changed. I think he is still seen as the crazy but genius artist. This image has off course an impact on the Van Gogh Museum in Amsterdam. This museum, dedicated to his work and life, had in 2012 the highest attendance in the Netherlands with 1.5 million visitors. It seems that image of Van Gogh really does not seem to hurt the Attendance. So as a marketeer I wonder; how do you do the Branding for such a well known icon and his museum?

Branding for a museum is not different than it is for any other company like Coca Cola or Disney. The purpose of branding is that in the mind of the consumer there is no other product on the market quite like your product. While Coca Cola sells brown sugar water, the likes of Disney and Van Gogh museum sell a more differentiated product. Disney sells stories in every way and shape. The van Gogh museum sells the van Gogh experience. That experience is broader than watching the paintings, it is also a way to be in the vicinity of something greater then yourself. To be in the vicinity of a great artist.

But here is the branding problem of the Van Gogh Museum. There are many great artists around the world and there are a lot of museum where you can experience them. Why choose Van Gogh above Picasso, Warhol, Rembrandt or any other artist? How can you keep the museum and the artist relevant for the next decade? The answer is not that Van Gogh’s works is the best so it should be seen, that is simply not true. The answers lie in great branding.

. In short great branding is focused, consistent and different than competitors (there is more to it but then you should read the book). Focused means that as a museum brand you should not want to do everything. The van Gogh museum should stick with the artist Van Gogh. Don’t include other artists, don’t expand your brand to all kinds of products that don’t have anything to do with Van Gogh (see the picture of the Van Gogh Chocolate Vodka).

Consistent means that the story you tell, the designs you use, the way you shape the consumer perception is the same over and over again. I actually don’t know what the story is that the Van Gogh museum is telling the world now. What I see is that they try to picture him as a more rational artist, but I don’t think there is a consistency. There seems to be no emotional appeal.

It is not hard to be different then your competitors.  The work of Van Gogh is certainly different, but the museum in itself is not. It is a museum temple where there are hundreds of around the world. Also the way they present themselves is like a classic museum. I must admit their facebook page is good and they have some special activities that are tailored for specific target groups.

So what would I recommend the Van Gogh museum about how they should brand themselves? First and foremost they should choose one word or one sentence that represents the museum. A word that is easy to remember, that stands out from the crowd, which has not been claimed.

I would choose: colorful

The colors of Van Gogh’s work are striking. The series of Sunflowers for example have so many shades of yellow that he can be claimed as a very colorful artist. Furthermore I think colorful is way more positive then crazy or cut of ear. But the word colorful does not hide his mental state. He was a colorful artist and a colorful character.

The emotional ring to colorful is high. Color play such an important part in our lives. People identify with special colors, they embrace color. What would be better then as a museum claim that you have the most colorful artist in the world.

Sure there are many other colorful artists. With branding that really does not matter at all. As a museum you should be the first to claim that word. Be consistent, tell it over and over again and in the mind of the consumer Van Gogh represents colorful. Simply said: If you want to experience stunning colors go to the Van Gogh Museum.

I made some designs to represent the colors of the sunflowers of Van Gogh. They are concepts, but what I tried to do is to make the work of Van Gogh more Abstract so that the people would see the colors more instead of the image. 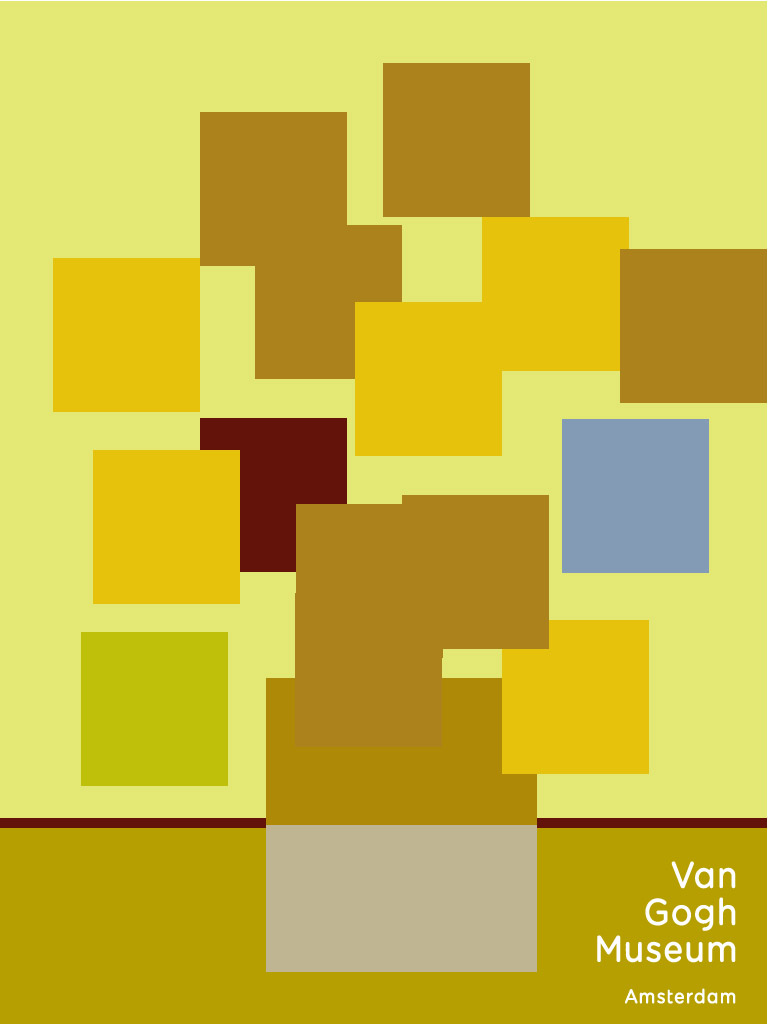 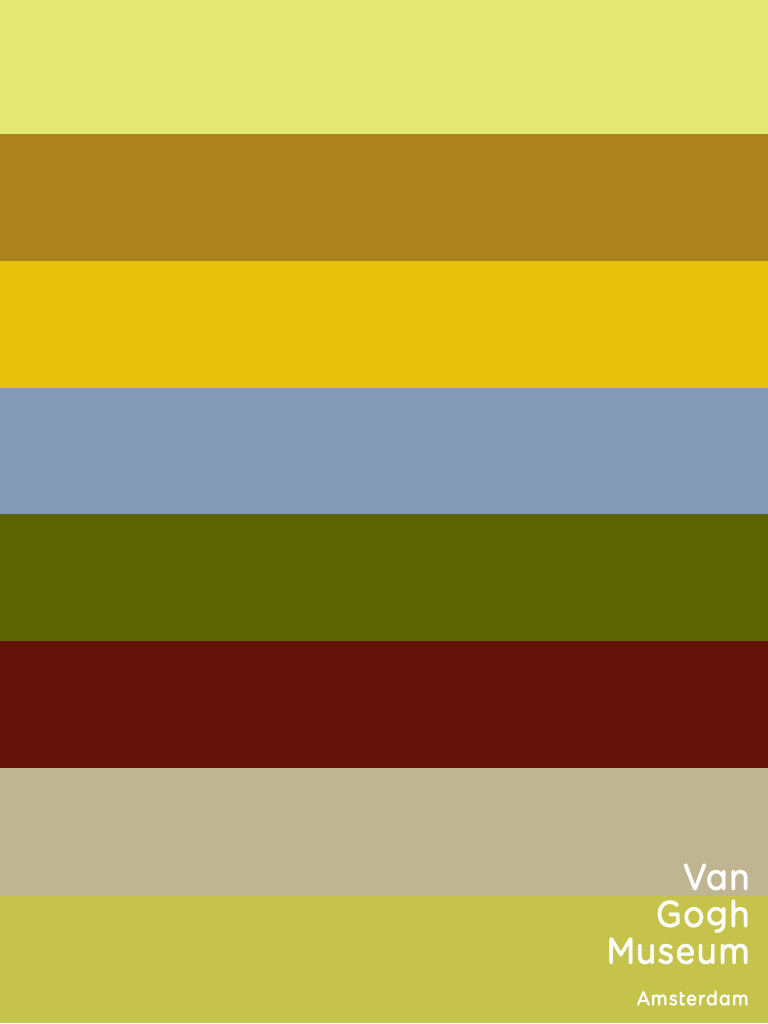 The colors of the sunflowers 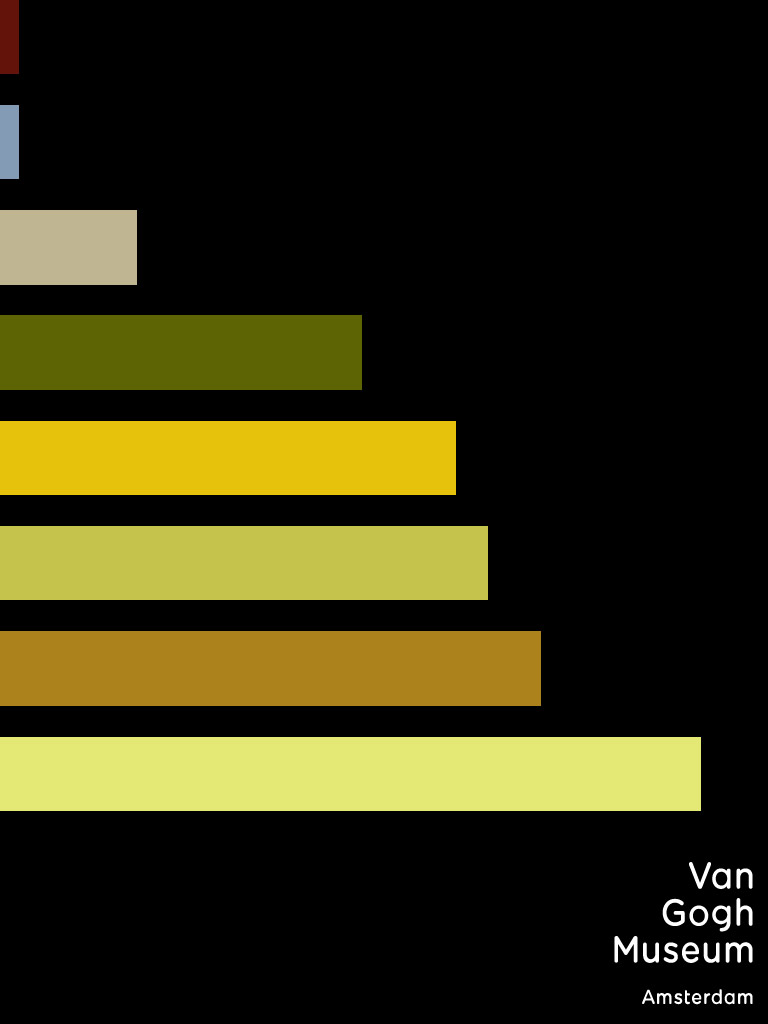 Infographic colors of the Sunflowers